With scenic landscapes, beautiful views of the mountains and calm and relaxing atmosphere you just cannot leave this place behind and head home rightly calling it 'Paradise on Earth'. Visit Khardung La Pass and Pangong Lake to make the most of Leh Ladakh and bring back mesmerizing memories with Shakthi Tours and Travels.

Arrival at Kushok Bakula Airport Leh situated at 3500m altitude, met by our representative at the airport and transfer to your hotel in Leh city 3 to 4 km. On arrival at the hotel then proceed to your rooms and take rest to acclimatize yourself completely to the high altitudes of Ladakh which is must. Later leave for Leh Local sightseeing visit Leh Palace is a former royal palace overlooking the Ladakhi Himalayan town of Leh. Modelled on the Potala Palace in Lhasa, Tibet, the palace was built by King Sengge Namgyal in the 17th century. It is nine storeys high; the upper floors accommodated the royal family, while the lower floors held stables and store rooms. Then visit to Shanti Stupa is a Buddhist white-domed stupa (chorten) on a hilltop in Chanspa, Leh district It was built in 1991 by Japanese Buddhist Bhikshu Gyomyo Nakamura . The Shanti Stupa holds the relics of the Buddha at its base, enshrined by the 14th Dalai Lama himself . then drive toward to Sangkar, after enjoyed your day evening free walk to Leh bazaar for shopping, overnight stay in Hotel at Leh.
2

After breakfast at Hotel you will be proceed to Thiksey village, visit Thiksey monastery and drive to Shey Village to visit Shey Palace and Gompa. Continue drive to Hemis monastery to visit one of the most famous monasteries of Ladakh.Later on the way back to Leh get down at the Sindhu Ghat for Sindhu Darshan and walk along the river, also visit 3 Idoits School campus. After spending some time at the river come back to the Hotel and relax, overnight stay in Hotel at Leh.
3

After breakfast full day excursion to Khardongla pass which is the highest motorable pass in the world 5600 Mtrs and has been recorded in the Gunnies Book of world records. At the top enjoy the nature beauty of snow capped mountain. In the evening back to the hotel for Overnight stay.
4

After breakfast at Hotel you will be proceed to Pangong Lake by Crossing Chang-la pass (The world's third highest motorable road 5360 m). On the way, you have amazing view of charming villages, beautiful mountains, animals like Yaks, nomads and beautiful valley of Changthang. Arrive at Lake, the Lake is 136 kms long and 5 kms wide, 47% of this lake is in India and rest is in Tibet. The view of lake is spectacular and breathtaking. Enjoy the unforgettable scenery beauty of Lake and the voice of Himalayan migrant birds. Evening free for leisure, Overnight stay in Fixed camp at Pangong Lake.
5

After breakfast drive back towards to Leh by crossing Chang-la pass (The world's third highest motorable road 5360 m). overnight stay in Hotel at Leh.
6

After breakfast you will be transferred to Leh Airport to catch flight for onward destination with sweet Holiday memories. 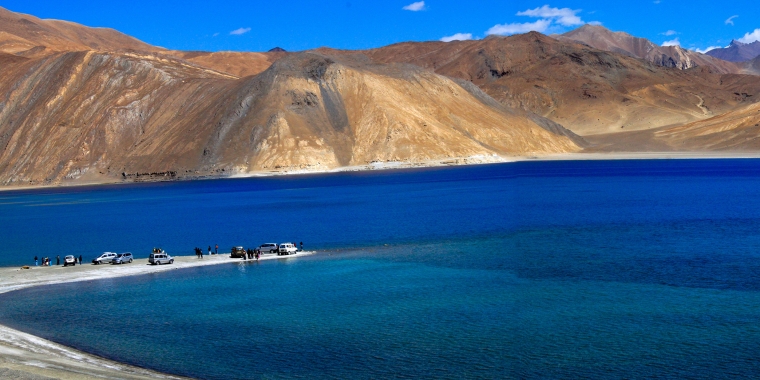